Centech, an incubator affiliated with the École de technologie supérieure (ÉTS), was ranked among the top 10 university business incubators in the world by UBI Global.

This ranking by UBI Global measures the performance of incubators based on their economic impacts, such as jobs, sales and investments, the scope of their network and service offering, and the attractiveness and reach of their program, both locally and internationally.

The recognition is testament to Centech’s key accomplishments, which stem from its accessibility, the continuous improvement of its coaching programs and the availability of a team of entrepreneurs in residence, all of whom are seasoned experts supported by major public and private partners. Over the last five years, Centech has made a significant economic impact, accelerating the creation of more than 400 exporting tech companies. A number of these companies have seen tremendous growth, including:

Since Centech’s inception, the companies it has supported have generated some $2.5 billion for Quebec’s economy, resulting in the creation of thousands of jobs in the tech industry.
This has been a major coup for these companies, which are working to revolutionize sectors such as transportation and logistics, automation and industry 4.0, medtech, energy and the environment, and telecommunications and microelectronics.

“We’re proud to see Centech ranked so highly. It’s the result of several years of hard work by our entire team and our entrepreneur coaches. This wonderful recognition highlights the most important element: the success of our start-ups that are making their mark locally and internationally. They’re the reason for our existence, and our success hinges on theirs. I’m thrilled that all of this is being acknowledged,” said Richard Chénier, General Director of Centech. 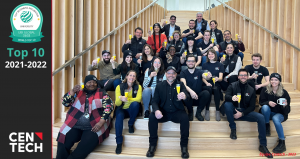 “I warmly congratulate the constancy and determination of the Centech team, which has managed to carve out a place for it among the best incubators in the world. Innovation and entrepreneurship are in the DNA of ÉTS and we are committed to continuing our support for start-ups to promote the technological and economic development of Quebec,” enthused François Gagnon, Director General of the École de Technologie Supérieure (ÉTS).

“This ranking gives Quebec visibility around the world and is in line with our goal of becoming one of the most innovative societies in the world. We need to better market our expertise and create more world-class tech companies. This type of news is proof that we have the tools to successfully achieve that goal,” said Luc Sirois, Quebec’s Chief Innovation Officer.

Centech would also like to highlight the stellar performance of the McGill Dobson Centre for Entrepreneurship, which garnered one of the top five spots in the ranking.

About Centech:
Centech is an ecosystem that propels technological innovation and entrepreneurship projects from science and engineering. Open to all, Centech was founded in 1996 by the École de technologie supérieure. Thanks to its Acceleration and Propulsion programs, Centech acts as a real instrument of growth, thus creating one of the largest concentrations of technology entrepreneurs in the start-up phase in Quebec and Canada.

About UBI Global:
UBI Global is an innovation intelligence community based in Stockholm, Sweden, specialized in evaluating and mapping business incubators and accelerators. Through a community of more than 1,200 member organizations from over 90 countries worldwide, UBI Global provides matchmaking, comparative analysis and research services to companies and incubators.